Upon her return to the country, Yvonne joined McGladrey, the 5th largest accounting firm in the country. After becoming the unit’s number one salesperson in the country, she was named the Director of the Phoenix office where she turned around the unprofitable practice. She then became the unit’s first National Operations Director, coordinating the operation of several offices across the nation servicing 5,000 clients with over $7 billion in assets.

Her other past entrepreneurial projects include ReEnergy, an alternative energy project in Texas, and Salvagist, an online retailer of accessories made from up-cycled materials. Yvonne sold Salvagist to Earth Lover Shopping in August 2010 and then founded Social Animal Media, a digital marketing company. She became a member of the International Business Innovation Association (InBIA) and earned her Business Incubation Management Certificate. She also became certified as a GrowthWheel consultant.

In 2011, Yvonne founded the eCenter@LindenPointe, a business incubator, in Hermitage, PA. She served for five years as the Executive Director of the incubator, which won the 2012 SV Chamber Phoenix Award for Innovation and the 2013 Pennsylvania Economic Development Association’s Project of the Year for the state. Jay Williams, U.S. Assistant Secretary of Commerce for
Economic Development, publicly stated that the EDA planned to use the incubator as a template for economic development in rural areas around the country. In 2013, Yvonne co-founded a mobile app company, BuzzBurrito, which was acquired in 2018.

Yvonne was named in the inaugural “Top 40 Under 40” in Mercer and Lawrence Counties, and she, her ventures, and her programs have been featured on ABC (33 WYTV) and on CBS (WKBN 27) as well as in Arizona Woman Magazine, The GCC GeDunk, the Phoenix Business Journal, Butler Business Matters, Youngstown Business Journal, the Vindicator, the Butler Eagle, the Brighton-
Pittsford Post, KeystoneEdge.com, Views and Voices Magazine, the Sharon Herald, the GCC Annual Report, Kiva B4B, Butler Business Matters, New Castle News, The Cranberry Eagle, Oh-Penn Magazine, the Allied News, OpportunityLives.com, the City of Hermitage Community Update, The Ride Home with John & Kathy (WORD FM), WSAJ radio, and Pittsburgh TEQ Magazine. She has
been a featured speaker for GCC’s Delta Mu Delta’s Induction Ceremony, Economics Pennsylvania, “Hope Banquet”, ATHENA International Women’s Leadership Day, Pittsburgh Fellows Leadership Day, GCC Chapel (2020), an 85 Broads speaker panel, and was was the Keynote Speaker for the 2013 NW PA STEM Conference. Yvonne has been a Featured Contributor to SheOwnsIt.com,
a publication centering on women entrepreneurs. She also had the honor of being selected by U.S. Congressman Mike Kelly to serve as the District Advisor for the 2014 Congressional STEM Academic Competition.

Yvonne received the Lean LaunchPad for Educators certificate, taught by Steve Blank at UC Berkeley, and earned a Master’s in Technology Entrepreneurship from the A. James Clark School of Engineering at the University of Maryland. She was a Chief Mentor at the European Innovation Academy (EIA), the world’s largest digital accelerator, started by Google, Microsoft, UC Berkeley, and Stanford University. She had the honor of being selected to serve as a Lean Ambassador for Lean Startup Week, the leading conference centered on lean startup methodology in San Francisco, CA, based on her work in the field. She also completed Life Design Studio Training for University Educators conducted by the Design Program at Stanford University.

Yvonne’s focus is on redemptive entrepreneurship, and she currently serves as Faculty-in-Residence at Praxis, a New York Citybased organization that acts as a creative engine for redemptive entrepreneurship. She loves teaching, tea, the Toronto Maple Leafs, traveling, theatre, the Pittsburgh Steelers, and spending time with her friends and family. She is married to an amazing guy,
Kyle, a Canadian American who serves as the Executive Director of the Community Foundation of Western PA and Eastern OH. They live in Pittsburgh with their quirky little dog, an Alaskan Klee Kai who prefers to be called by her full name – Juno English.
Speaking At
Innovating Amidst Uncertainty 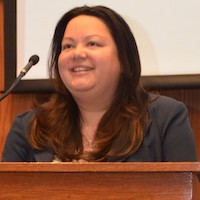